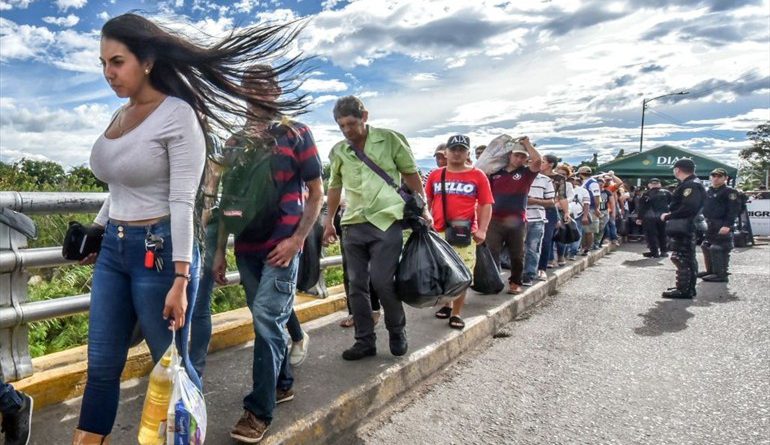 The problematic economic and social situation in Venezuela is well known to us by now as the topic makes at least a weekly appearance in international media outlets.

Beyond the macroeconomic statistics and the high-level policy talk, these numbers and figures really affect the daily life of not only Venezuelan citizens, but also of some Latin American neighbors: we live in an era where no country can afford to be isolated from the rest of the world, and where what happens in Venezuela does not necessarily stay in Venezuela.

The countless anecdotes of Venezuelans who migrated to Colombia in an attempt to escape scarcity and the excruciatingly painful habit of making queues are dramatic. Queues apply to basically everything: to get basic medicine, food, and beverages, to make a deposit in a bank account, etc. One particular story about a man named Wilmer Rojas really struck me: a local Miami news broadcaster manufactures purses with Bolivares bills. The story was such a shock to me that I tried to dig a little deeper. Indeed, as reported by The Epoch Times on February 14, Rojas mentioned that “you can use magazine paper or newspaper pulp, but currency notes are better because they are not worth anything, they are all the same size, and you don’t have to waste time cutting them.” Apparently, Rojas is able to support his family of three children by manufacturing purses out of bills and selling them to foreigners.

Moreover, the testimony of Ana, a Maracaibo Venezuelan immigrant currently living in Bogota is surely telling. Ana, a professional woman who studied statistical sciences with a focus on healthcare at a renowned public university in Venezuela, talked to us about this phenomenon. She told us the “restrictions we have to go grocery shopping are (sigh), they are just unimaginable. For instance, we have to queue up for hours to buy regulated goods. That was my case: I used to go to a supermarket that was close to my home; I would get there at 2pm and sometimes leave by 1am the next day without everything on my list, simply because my salary was not enough to buy what I needed. A typical basket of goods is worth 63M Bolivares and a Venezuelan usually makes just 2.5M a month. … It is indeed a terrible crisis; most of us have lost many pounds out of stress, but also because we cannot even eat well. There are families that can only eat once a day, and in the worst-case scenario, they don’t have access to a meal in the entire day.”

The situation appears to be far worse when assessing access to medicine and health services. Ana was quick to comment that it was extremely difficult to get access to antibiotics, medicines for diabetics or other rather essential drugs. “I worked at the statistical department of a hospital and I kept the books that accounted for pediatric and adult emergencies and I remember that only in one month more than 500 children from 0 to 5 years old died from malnutrition and lack of medicine. That is something that the government hides, but I know how it works as I worked directly with the statistics. I actually had to give up my job because at some point it was not even profitable for me to go to work.”

The complicated economic situation also effects firms and businesses. In my conversations with Raul Gallego, Associate Director for Control Risks’ Global Risk Analysis unit in the Andean region and an expert on Venezuela, I learned that “the government has realized that the exchange rate policy is a tool with which it can control the private sector …the government can punish or reward a firm with access to US dollars. Basically, the Central Bank and the government decide who gets those dollars.” Gallegos was quick to add that this void opens a window for corruption, bribes, and the possibility to sell dollars on the black market.

The transaction costs for firms and the uncertainty with regards to the government’s economic policy make it difficult for businesses to prosper and operate properly. For instance, the number of currency exchange systems that the government has implemented in the past several years is rather preposterous. CADIVI, CENCOEX, SIMADI and now the DICOM are all institutions and systems created by the government to coordinate the exchange rate policy in Venezuela.  Girish Gupta, Venezuela-based journalist and physics graduate, also points out that basically “nothing works, not even the most basic transaction in a bank.” Gupta actually came up with a truly groundbreaking idea in January 2015, Venezuela Econ, an app with 15,000 users across different platforms that maps and graphs more exchange rates and other 30 social and economic indicators due to the difficulties faced by investors in trying to find reliable data.

And while the situation is not reassuring in Venezuela, the same could be said about other nations that are being affected by the turmoil in the country. According to Ana, her family is now spread among three different countries in South America: “my family had to emigrate as well, my mom is in Colombia, my older son and my brother are in Peru, I have cousins who have moved to different posts, to Ecuador, Peru, Colombia…all because of the serious crisis that we are currently facing in Venezuela.”

Colombian public entities are facing a quite long list of challenges, ranging from assuring the security of the local population to guaranteeing the appropriate usage of public space. As Natalia Duran, director of the Office of International Affairs of the municipality of Bucaramanga points out, “there is no way to stop this migration … it is a human phenomenon that has been occurring for a long time now.” As she rightly suggests, public entities and the citizenship in general “need to think about strategies that are suitable for all, avoid the formation of ghettos and discourage any actions that foster xenophobic manifestations.” Duran was also keen in listing several challenges such as: the occupation of the public space by groups of immigrants who cannot afford housing in the city, how to cope with contagious diseases, the ways in which immigrants can join the work force (and here, the challenge is that many have entered the country irregularly and compete in informal commercial activities with Colombian low skilled labor), etc.

Perhaps the greatest challenge of all is the lack of alignment between the national level macro policy and the local capacity to take action: local municipalities’ hands are tied when it comes to taking certain steps in the absence of budgetary or legal tools, or even a clear set of directions from the national government.  Furthermore, according to Dalia Rodriguez, a liaison officer between the Colombian National Police and the department of Citizen Security attached to the presidency, “a key challenge to us is keeping up high security standards within major cities because, unfortunately and since approximately October 2017, authorities capture on average one or two Venezuelans working with Colombian counterparts to engage in minor felonies every day.”

It can be said that Colombian authorities certainly recognize that the number of immigrants who want to engage in legal activities exceeds the number of immigrants who, sadly, are forced to participate in illegal actions, and as such, need to provide a wide range of services for those trying to engross the workforce. Ana underscores how when she moved to Colombia for the first time, she was willing to work any lawful job that she could get. Recently, she covered her mom’s job for a couple of weeks, working for a family in Bogota helping out with domestic tasks. As she points out: “I know that living in Colombia and having a job here, whatever job as long as it is licit and honorable, will help my family; the Bolivar is worth nothing so every penny I can send from Colombia to Venezuela is going to be of help for my family.”

It is uncertain how the Venezuelan government will address the present economic turmoil, and it is also uncertain how the governments of the region, and particularly the government of Colombia, will address the social phenomenon of migration. Hopefully more concrete actionable points will be announced soon and both the Venezuelan and Colombian populations can benefit from these measures.

Angela Maria Cobos Monico is a Colombian MBA candidate at the Tuck School of Business. Prior to Tuck, Angela worked for five years as an analyst and consultant for Control Risks, a global risk consultancy specialized in helping clients build secure, compliant and resilient organizations. As a Bogota-based consultant at the Compliance, Forensics and Intelligence department, Angela managed reputation and integrity risk projects, enabling clients in a wide array of industries to enter and securely seize market opportunities in 7 Latin American countries, including: Colombia, Ecuador, Peru, Venezuela, Bolivia, Mexico and Panama. As part of her role, Angela supported a vast number of political risk assessments for international clients seeking to invest in the Andean region. Angela has a Bachelor of Arts in Political Science and International Relations from the Pontificia Universidad Javeriana and a specialization in Economics from the Universidad de los Andes in Bogota. She speaks English and Italian in addition to her native Spanish.