Home > Uncategorized > The Day I Learned from Elton John 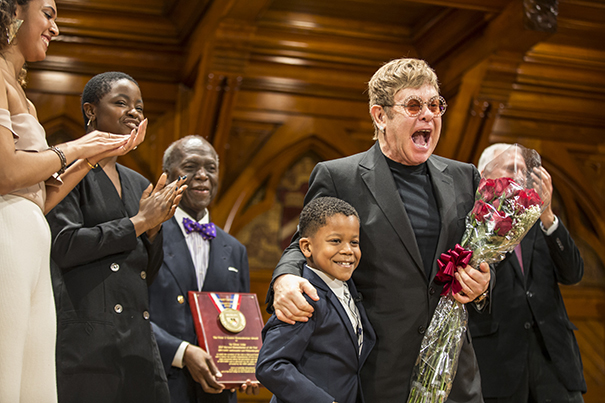 By:  Isabela Garbin Ramanzini, Fellow at the Carr Center for Human Rights Policy

Early last month, like many other Harvard affiliates, I lined up for tickets to the Harvard Foundation’s Peter J. Gomes Humanitarian Award ceremony at the Sanders Theater. The nominee of the year was no one else but Sir Elton John. Beyond the willingness to support his charitable work on AIDS/HIV, I would guess many there were driven by the excitement of being a little bit closer to a celebrity. But I had just a slightly more neutral mission this time: it would be, perhaps, my best chance to observe – on empirical grounds – flaws on global celebrity humanitarianism.

Tickets at hand, the man at the box office just made me sure not to expect any performance, spectacle or so. I nodded as I guaranteed my place in the audience. That was just the beginning of my field experiment.

More than ever, the involvement of celebrities in global politics, and especially in humanitarian assistance, has been up to debate. As soon as the press pitched the trend of a celebrity global activism phenomenon in the 2000’s, scholars started to scrutinize it. Looking for its historical backgrounds, means of action, and potential impact, by the end of the 2010’s, there was enough specialized critique available for those proud of being always at the smart side.

Criticism on global celebrity activism – accurate in many cases – comprises allegations of frivolity, opportunism, lack of expertise, discontinuity, depoliticizing, and consumerism, all of which encompass perverse and harmful effects of the celebrities’ involvement in global policy. Unsurprisingly, in these debates, moderates acknowledge celebrities at best as decorative status (generally to entertain boring work routines, like in the United Nations); while more stringent voices call them up back to their day jobs.

As the award ceremony went on, my scholarly-driven perception began to get seriously challenged. In his awaited speech, Elton John addressed personal shortcomings (nope, he wasn’t there to play the hero); he illustrated how philanthropy served the purpose of changing his personal identity (not his public image); he stressed the transformative power of kindness and humanity in the hands of each and every one (and definitely not the star power on his own hands).

Apparently, there was something not fully captured by theoretical examinations. Instigated by my observational findings, I went back to my early readings and realized how scarce attention has been given to Elton John’s case, an example of long-standing personal commitment and impressive achievements. The artist was one of the early advocates on AIDS/HIV at a time when no politician would dare risk his own image on behalf of an epidemic disease associated with gay men “living the 1980’s Hollywood lifestyle.” Within a real political vacuum of leadership, he founded his own NGO 25 years ago, which has been rated one of the most accountable, transparent, and enduring efforts against AIDS/HIV in the world. As a matter of numbers, he raised more than $385 million to create awareness and advocate on prevention and treatment of AIDS/HIV in the U.S, Caribbean, and Latin America. Also, part of his ‘day job’, the hit “The Last Song” refers to the suffering of people dying of AIDS/HIV. With such circumstances, Elton John’s case would classify as an exception in the scholarship, perhaps just a matching feature to his personal fate of not fitting ordinary models.

In spite of muting criticism on celebrity activism, I wonder about the diverse effects there would be as the result of a more respectful, well-informed and propositional approach between celebrities and Academia. Forcing myself to see things through a more optimistic lens – a daily exercise I would recommend to anyone – I see potential, mutual benefits from the flow of ideas between these worlds apart, like the promotion of positive attitudes, providing emotional connections, inducing active responses, and, very importantly, the mobilization of young generations on the leadership of sensitive topics.

When Harvard honored Elton John, it also made significant steps against walls dividing the transformative flow of ideas and actions towards constructive political change. A celebrity-scholar connection, rather than harsh opposition, can potentially create more positive, innovative, and accountable responses for the most compelling problems in today’s world. Elton John, a man whose gift is putting our common humanity down into words and actions, taught me a meaningful lesson last month. Against all odds, I left the theater with feeling what memorable spectacle I had that night!