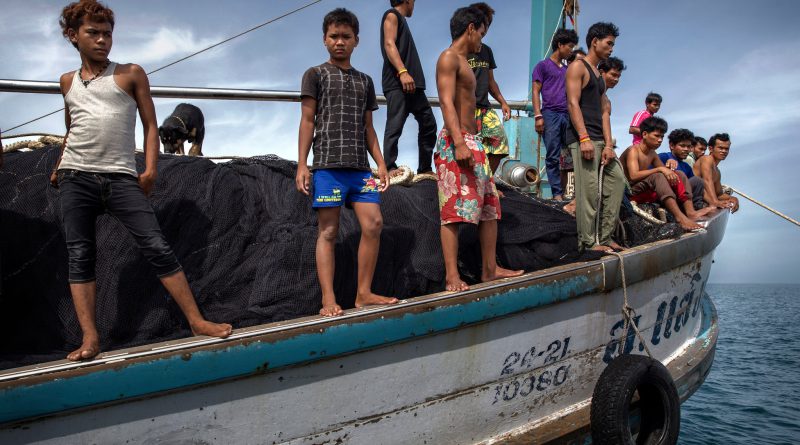 The Tariff Act of 1930 in the United States precludes the purchase of goods made from forced labor. One would expect that this piece of legislation not only comports with American values, but also incentivizes producers to comply with international norms regarding labor practices. Nothing could be further from the truth.

Modern-day slavery persists. The State Department’s Trafficking in Persons Report classifies several countries in Asia in particular as “Tier 2 Watch List” or “Tier 3.” In 2016, the “Tier 2 Watch List” included China, Hong Kong, Kiribati, Laos, Malaysia, Pakistan, Thailand and Tonga. The “Tier 3” countries were Burma, North Korea, and Papua New Guinea. International organizations have drawn attention to this obstinate problem, but true advances have only recently been made through new legislation and changes in corporate practices.

Forced labor and debt bondage are prevalent in the commercial long-haul fishing industry. Fresh fish and fishmeal are a $7 billion business between Southeast Asia and the United States. This industry is responsible for stocking the shelves of Costco with Purina’s Meow Mix and the $23.99 tuna in the “Fresh Catch” seafood section of your local Whole Foods Market.

Young boys from Cambodia, Myanmar and Indonesia who illegally migrate to Thailand in search of work fall prey to this form of exploitation. With no education, no money, and no family support, these children accept offers to work on fishing boats for one year. The salary is minimal, maybe ten dollars per day, a far cry away from the $80,000 salaries of licensed professionals in the fishing industry. The employers are captains who pilot unregistered vessels and are often under pressure to meet catch quotas. They usually travel to distant, unfished waters.

The children are forced to work under dangerous conditions with little rest. Accidents and infections are commonplace. Laborers are drugged with amphetamines to double up their day shifts with night shifts when schools of fish reflect better against the moonlit sky. Basic plumbing and hygiene are absent, resulting in leptospirosis, cholera, typhoid, dysentery, and tuberculosis that make working even more dangerous. A typical day might start at 8:00am with a break at 3:00pm; work then begins again at 5:00pm and ends at 6:00am. Those who do not work hard enough or resist their captors are beaten, sold at sea to another ship, or simply thrown overboard. Even after one year of indentured servitude, some are forced to work for several more years against their will.

As undocumented workers, these children have no legal recourse at their disposal. Without identification papers or other critical documents, they cannot escape their captors even when the ships dock. These laborers essentially survive at the mercy of the boat captains. An inadvertent death – such as a boy getting pulled into the ocean by fishing nets – is immediately forgotten. The captors manage the loss of a “slave” by simply removing the name from the crew manifest.

It is hard to believe that this form of abuse still exists in our global community. Field experts who have gathered information from captured fishing trawlers and undocumented workers estimate that there are tens of thousands of unregistered workers on “Ghost Ships” that roam Southeast Asian waters.

This practice of modern day slavery will continue as long as the economic demand for Southeast Asia’s fish industry exists. The United States is the single biggest destination for the Thai fish market. Americans consume about five billion pounds of seafood per year, 90 percent of which is imported. This makes the U.S. the second largest market for imported seafood in the world (Japan is the largest market for imported seafood). American cats consume over 30 pounds of fish annually. This makes pet food Thailand’s fastest growing export, reaching nearly $200 million in 2014. The U.S. government has ranked Thailand among the worst countries regarding exploitation of labor and human trafficking. Although the Thai government has promised to address the situation, there has been a lack of any clear evidence for improvements within the system. With so much money at stake, what chance does an undocumented child laborer have in receiving help?

The laborers on these “Ghost Ships” are victims of trafficking who go largely ignored by the advanced industrial world. This dilemma must be addressed by greater corporate social responsibility (CSR). Food companies like Nestle, who make Fancy Feast and Purina Cat Chow, have initiated investigations into labor abuses in the supply chains. Another food giant, Mars, Inc. has moved away from using fishmeal as an ingredient in their pet foods.  New apps are being developed like Free2Work, Slavery Footprint, and Made in a Free World that allow consumers to determine whether they are purchasing goods made with slave labor.

In addition to CSR efforts, international institutions and governments must take on the role of raising global awareness. The Association of Southeast Asian Nations (ASEAN) in 2004 signed a declaration against trafficking in persons but there was little leadership among ASEAN nations to enforce the declaration.  It took over ten years before a legally binding convention was legislated and ratified among ASEAN members.

In December 2015, the United States established an Advisory Council on Human Trafficking comprised of trafficking survivors who could raise awareness and provide advice to U.S. lawmakers. One area of concern was the way in which U.S. companies could import goods made from slave labor without violating U.S. law. What is generally overlooked is that the Tariff Act of 1930 bans the import of goods produced from forced labor. However, for the past 85 years, a “consumptive demand” loophole has allowed U.S. companies to import these goods if they can demonstrate there are no alternative, cost-efficient suppliers elsewhere.  Seafood from Thailand, peanuts from Turkey, and carpets from India, all made by forced labor; these products have freely come into our country for decades. President Obama finally eliminated this loophole through the signing of the Trade Facilitation and Trade Enforcement Act in February 2016.

Although companies must now be aware of these new legal restrictions, real change requires not just a slap on the hand for illegal corporate practices, but a change in the way society views this dilemma. American citizens have more power here than they realize. The practice of sea slavery has only recently been spotlighted for international recrimination because of public interest. The Trade Facilitation and Trade Enforcement Act allows any individual to request an investigation by the U.S. Customs Bureau if there is legitimate concern about slave labor in the supply chain. Apps like Made in a Free World allow shoppers to write directly to companies demanding cleaner supply chains. In California, for instance, citizens have pressured their state governments to pass laws that require companies to publicly report their efforts to eradicate slave labor from their supply chains.  When the public repudiates goods produced through slavery as both terrible business practice and morally reprehensible, corporations will value their exclusion from the “slave labor blacklist” more than they value profit.