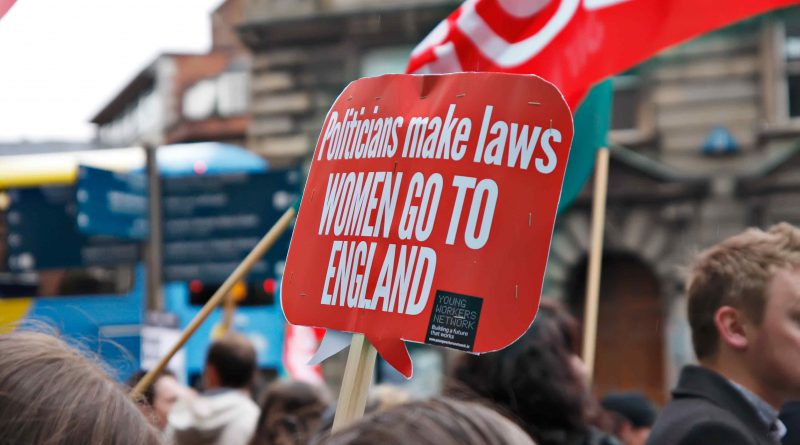 Remarkable changes are afoot in Ireland: a government-appointed citizens’ commission seems poised to recommend pivotal reforms that would liberalize the country’s near-total ban on abortion.

Ireland is a country where the anti-choice movement has remained fierce and powerful even as the rest of the world moves towards decriminalizing abortion and the Eighth Amendment to the Constitution gave the unborn the same right to life as to the mother. But a combination of international human rights advocacy and domestic mobilization is finally making a difference.

Irish law only permits abortion in cases where a mother’s life is at risk from physical illness or suicide. Even in those situations, women are denied care because of legal uncertainties. This is what happened to Savita Halappanavar, who in 2012 went to an Irish hospital while having a miscarriage and ended up dying from septic shock because doctors refused to give her an abortion.

Many Irish women travel to other European countries, such as the United Kingdom or the Netherlands, to obtain abortions. In 2015 alone, the British government reported providing abortion services to 3451 Irish women.

The experience can be harrowing. Take the story of Amanda Mellet, who in her second trimester of pregnancy discovered that the fetus she was carrying would either die before or right after birth because of a fatal fetal impairment. She traveled to the United Kingdom at her own expense to have an abortion. Twelve hours after undergoing the procedure, still bleeding, she flew back home, never receiving post-abortion care or counseling. In June 2016, the United Nations Human Rights Committee—which monitors compliance with the International Covenant on Civil and Political Rights – declared that Ireland’s abortion ban subjected Mellet to cruel, inhuman and degrading treatment, undermined her personal integrity and autonomy, and violated her right to privacy.

Specifically, the Committee found that Mellet’s physical and mental anguish was exacerbated by her inability to continue “receiving medical care and health insurance coverage for her treatment from the Irish health-care system; the need to choose between continuing her non-viable pregnancy or travelling to another country while carrying a dying fetus, at her personal expense and separated from the support of her family, and returning while not fully recovered; the shame and stigma associated with the criminalization of abortion of a fatally ill fetus; the fact of having to leave the baby’s remains behind and later having them unexpectedly delivered to her by courier; and the State party’s refusal to provide her with the necessary and appropriate post-abortion and bereavement care.” This combination of circumstances amounted to cruel, inhuman and degrading treatment, in violation of article 7 of the ICCPR.

Mellet’s case is one of two that the Center for Reproductive Rights, an international legal advocacy NGO, brought against Ireland before the Human Rights Committee in an effort to pressure the Irish government to reform its legislation.

The ruling is the first time that an international human rights body has recognized, in response to an individual complaint, that criminalizing abortion is a human rights violation. Shortly after the Committee’s ruling, the Irish Parliament created the Citizens’ Assembly, a group of 100 citizens led by a Supreme Court judge, to review the country’s abortion law. In November the government also agreed to provide Mellet with financial compensation and counseling services.

While the decision of the Human Rights Committee may have spurred the government to action, activism inside Ireland has played a critical role as well. Through media outreach and submissions to government officials, groups such as the Irish Family Planning Association have been shaping public opinion, raising awareness of how the abortion ban undermines women’s fundamental rights, and laying the groundwork for legal reforms. The Citizens’ Assembly will be reviewing over 13,000 comments from members of the public.

This citizen engagement is as vital as the Committee’s ruling—research by scholars such as Beth Simmons has shown that international human rights law has the greatest impact when there is a strong domestic movement in place to turn rights on paper into reality. Colombia’s Constitutional Court, for example, liberalized the country’s total ban on abortion in 2006 after women’s rights activists mobilized to incorporate language from the United Nations Convention on the Elimination of All Forms of Discrimination against Women into the country’s new constitution.

The Assembly is expected to make its recommendations to the Irish Parliament this spring, and according to the Irish Times members are “leaning towards a change” in the abortion law. But certain stakeholders, as well as the influential Catholic Church, are still staunchly opposed to any reforms. Now, more than ever, it is critical for activists to continue to apply pressure on the Irish government to repeal the abortion ban.